We contributed some animation for a new music video for Lucy Kaplansky's song "This Morning I am Born Again" from her new album "Reunion".  The video was hypnotically directed by Rick Litvin. Not that he directed it through hypnosis because I don't know how you can actually do that, but that the result is vividly hypnotic.  I mean not in the sense that you are going to fall asleep and cluck like a chicken or stop smoking or anything like that but that.. well...you get the idea.  Just watch and enjoy.

Here's wishing one and all a great year in 2013 filled with health and happiness, peace and prosperity (aka a little wealth). We haven't been posting as much as we should be but that's about to change. Why you may ask? Well...It's one of our resolutions to stop by with some news and post something (anything) more often! I mean really? How hard is that going to be compared to our past record? See you soon. R & D
Posted by W/M Animation at 12:35 PM No comments:

Happy About My Depression

Last year, theater multi hyphenate and wonderful human being Elizabeth Swados called on WM Animation to help with a special project.  Ms. Swados, who had a Broadway and international hit show Runaways, is also a writer and wrote an illustrated humorous book depicting her experiences suffering with depression.  Having a lot of success with the book, Ms. Swados decided to try and turn it into an animated short film and came to us for help.  We were asked to create a one minute sizzle (as they say in the biz) to generate interest and show how Liz's crude yet whimsicaldrawing style could be modified while keeping the flavor of the original pen and ink drawings.
Keeping a very loose drawing style using Flash and using minimal color we animated a one minute piece that introduces the main character and the premise of the film with wonderful narration by Sigourney Weaver.  Happily, the film has found most of its needed funding and we are now in the midst of the writing the screenplay in conjunction with Ms. Swados.  Executive Producing the film is Roz Lichter and Producer is Joshua Hetzler.  Music for the sizzle composed and performed by David Nelson.

Posted by W/M Animation at 5:13 PM No comments:

In an effort to bring more exposure to their snack Ritz Crackerfuls, Kraft foods launched a facebook game created by W/M Animation and produced through Acme Filmworks.  The game is a first-person scenario where the user plays as the main character who is experiencing hunger at work and gets to make decisions and follow different paths for the character to take resulting in an array of various endings.  The game and entire Ritz campaign was conceived by Euro RSCG Worldwide and took a lot of figuring out to keep track of the scenario segments and ensure the continuity is maintained so that the different paths transition smoothly.
We wanted to try and bring some familiarity and reality to the spot so while the characters were created in and animated in flash, the backgrounds were done with a more photo-realistic feel and the office environment was built in After Effects to give the characters a "3D" environment to walk through to enhance the illusion of the user AS the character.
The game hopes to connect with adults 25 - 54 who may often find themselves at their desk waiting for their lunch breaks and hoping to have a snack they can munch on till then.  While deciding what to eat, why not try out the game on facebook?
facebook.com/RitzCrackerfuls
Here is a recent NY Times article about the project.
Kraft Tries Again With a Ritz Snack, Aiming Younger
Thanks to our crew and all the people at Euro RSCG for seeking us out to work on this project.
Special thanks to Pernille D'Avolio who did a great job of producing this for Acme.

Posted by W/M Animation at 2:13 PM No comments:

Weird Al Yankovic is most famous for his parodies of popular hits but he also has recorded a number of polka medleys which are snippets of songs that he reinterprets as polkas complete with accordian, tuba, clarinet and a slide whistle or two. Mostly the videos for his medleys are clips from the original artists music videos that are strung together and occasionally sped up to allow for the sometimes peppier beat of the polka.
For his latest medley, which features songs from Lady Gaga, Kay Perry, Pink and many more, he decided to have the video done in animation and enlisted the aid of Acme http://www.blogger.com/img/blank.gifFilmworks to put it all together as a sort of anijam type of film where various artists will do each segment.
We were requested by Yankovic to participate and had a lot of fun in producing six of the segments for the video which will be featured on his Comedy Central special "Weird Al" Yankovic: The Alpocalypse Tour which prremiers Saturday, Oct 1 at 9/8c.
The remainder or the segments were produced by the following talented filmmakers:
Dan Meth, Philip Eddolls, John Dilworth, Janet Perlman, Anna Bergmann, Chris Hinton, Greg Holfeld and Sharon Colman Graham.
It's an eclectic piece of animation but quite fun to watch.

It was quite a surprise as the long dormant TV FUNHOUSE segment on Saturday Night Live returned with a special cartoon produced by W/M Animation on last Saturday Night's episode hosted by Ed Helms. The seeds of the cartoon began with an Ambiguously Gay Duo feature film script that creator Robert Smigel wrote five years ago with Stephen Colbert. Recently it was suggested by comedy director Jason Woliner that it might be interesting to do the Gay Duo as a live action short for SNL. Smigel liked the idea, Woliner was tapped to direct the live action and long time collaborators David Wachtenheim and Robert Marianetti of W/M were asked to handle the animation.

Utilizing all the old cartoons, W/M produced a storyboard incorporating as much reuse of standard shots from the original cartoons that they could but the whole thing had to be reanimated for a 16:9 wide screen format instead of the original 4:3 anyway. Unlike all the previous shorts, this one was going to be produced in Flash instead of traditional paper and pencil but in the way W/M has been using Flash. "We animate in Flash like it's on paper. We don't use tweening or squashing and stretching elements which is what gives flash a digital look. We just substitute a tablet for paper." explains Wachtenheim. The stellar animation crew, comprised of Dan Madia, Stephen Jackett, Don McGrath and Tom Witte blazed through the animation in six days and After Effects artist Dale Clowdis burned the midnight oil to composite the cartoon. Original Gay Duo production company JJ Sedelmaier Productions graciously provided the original BGs for W/Ms use which, ironically, were originally painted by Wachtenheim when he was employed there, and Kevin Lacroix provided additional BG painting. W/M also contributed to the writing, consulted on the costumes and worked back and forth with the live action director and the editors to make sure the transitions from animation to live action worked.
Could this mean more cartoons for SNL and a return of TV Funhouse? "It would be nice but I kind of doubt it," adds Marianetti, "It was great for us to revisit SNL after the show stopped producing the cartoons three years ago. We've done more cartoons for them than any other studio. This one being exactly number 50 produced by our studio W/M Animation. I'm not sure why, maybe because The Ambiguously Gay Duo was the very first cartoon on TV Funhouse, but it feels like we've come full circle with this one. Plus, even if we never do another cartoon for SNL, at least we went out with a bang."

All in all, it was a huge surprise for the audience to see Jon Ham and Jimmy Fallon in the starring roles with Steve Carell and Stephen Colbert, long time voices of Ace and Gary as the live action villains. SNL host Ed Helms and cast member Fred Armisen rounded out the villainous crew. As soon as the cartoon aired, the internet has been all abuzz regarding the return of TV Funhouse and the ever popular Ambiguously Gay Duo. 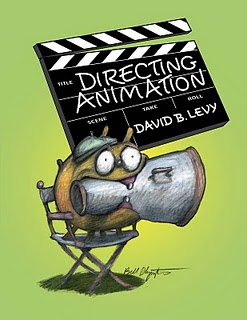 It's PLUG TIIIMMMMEEEE!!!!
Yes, it's that portion of the show when we plug the latest hot ticket item to buy for the holidays. Today, we are happy to recommend our friend Dave Levy's latest book entitled "Directing Animation". Very appropriately titled because it is about directing animation. What's that you say? What's to direct? There are no actors in animation. Au contraire mon frere! An animator is an actor with a pencil (or Wacom stylus) and there is a team of designers and artists who need a leader with the artistic vision to head up the production.
The book is CHOCK FULL of insight and information from a wide range of directors of commercials, web, TV and film that shed light and offer advice on what it takes to direct in animation.
Dave's style of writing is informative and witty and will have you laughing while hearing great anecdotes about production woes and triumphs. You can't get this information anywhere else. Learn directly from real life situations from some of the top directors in the industry today. What's really great is that Dave Levy is a director himself so not only does he offer his own animation war stories but you get the real meat of information because he knows what he is talking about and knows what to ask of his interviewees. Learn from their mistakes and their revelations of secrets behind the drawing table. You can't learn this in in a classroom kids!
It's a great book for anyone interested in the process of animation or if you know someone in animation and just want to learn a little bit more of what they do.
Oh, and I'd be remiss if I didn't mention that it includes some awesome insights from David Wachtenheim and Robert Marianetti. Yes, we are in the book. Ok, there I said it. I'm biased. But it really is a great read.
Posted by W/M Animation at 10:45 AM No comments: